The Archaeological Project at 810 Royal Street

Early in 2015, Ryan Gray of the Department of Anthropology at the University of New Orleans was invited by the property owners at 810 Royal Street to examine its archaeological potential. Even in a historic neighborhood like the French Quarter, there are no local laws mandating that the archaeological potential of a site be addressed before it is developed, and federal laws protecting cultural heritage do not apply. Furthermore, because much of the oldest portion of the French Quarter has been developed for the better part of two centuries, it can be difficult to access archaeological deposits in the area, as they are covered over by pavements and buildings. While the collapse in 2014 of the building that had stood at 808-810 Royal Street was unfortunate, it also thus provided a rare opportunity. Archaeologists were given unfettered access to investigate the 810 Royal lot in detail.

Dr. Gray, his students, and volunteers have conducted two seasons of excavations at the site. The historic building that had occupied the lot was constructed in the early 1800s, but the most unique aspect of the archaeological history the lot appears to be deposits from the early Colonial era. Thousands of artifacts have been recovered so far, and the archaeology lab at UNO is engaged in an ongoing effort to analyze that material and present it to the public. 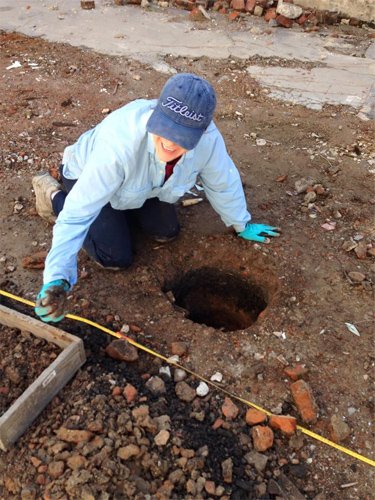 History of the Site

Much of the history included here is derived from the Vieux Carré Survey, a valuable archive of information about the history of every building and lot in the French Quarter. It is currently archived in an on-line version at the website of the Historic New Orleans Collection (http://www.hnoc.org/vcs/). Since sometime after 1801 until 2014, the lot at 808-810 Royal Street was occupied by a small complex of structures developed by Don Francisco Balthazar Languille at the same time as the lots at 800 Royal and 635-637 St. Ann Street. The exact floor plan of the complex at 808-810 Royal shows a few shifts in the years for which detailed information is available (mainly in the period after the 1870s), though the primary 3-story building occupying the front of the lot appears to have been relatively stable.

The period of primary archaeological interest for the 808-810 Royal lot is in the years prior to the Languille development of the lot. In the initial eighteenth century subdivision of this block, the majority of the 808-810 lot was actually included in the first downriver lot, labelled as #83 on the so-called Le Blond de la Tour map of 1722. This map shows two buildings on Lot #83, one at the street frontage (presumably the primary residence) and one set somewhat back; it is only this secondary structure that would have been included in today’s 808-810 lot. The 1731 Gonichon map of New Orleans shows the lot, now labelled as #84, as occupied by only a single primary structure set back from the street frontage.

The de la Tour and Gonichon maps provide some information on land tenure for the early part of the Colonial era. The plot was initially assigned to Francois Fiot, but by 1731 it was occupied by the Canadian Augustin Langlois, who came to New Orleans with two brothers. Later, the property was owned by the Spanish intendant, Juan Ventura Morales, and it appears in notarial records when it was purchased in 1784 by Antonio Boudousquier. Whatever building stood on the property in 1784 would have burned in the 1788 ‘Good Friday’ fire that levelled much of the city, and Boudousquier sold the property after that fire, along with rights to whatever debris remained from the prior building, to Don Manuel de Lanzos. De Lanzos is better known as the owner of Madame John’s Legacy around the corner on Dumaine Street, and he entered into a contract with Robert (or Roberto) Jones, the same builder responsible for the reconstruction of Madame John’s, to build a modest house on the lot.

It is sometime after 1731 that the boundaries of the lot shifted, but for reasons that are no longer clear. The lot originally at the corner of St. Ann and Royal and the lot initially including 808-810 Royal were both standard lots with a 60’ frontage in French feet along Royal when first surveyed and illustrated (as shown on the 1722 and 1731 maps). However, at some time between 1731 and the 1788 fire, 20’ was added on to the lot at the corner of St. Ann and Royal, so that it totaled 80’ of frontage along Royal. Edith Long, writing in the Vieux Carre Survey, speculates that this may have happened as a result of the wealthy Rivard-de Kernion family (during the French era) or the Toutant-Beauregards (during the Spanish) expanding the corner lot during their ownership of it.