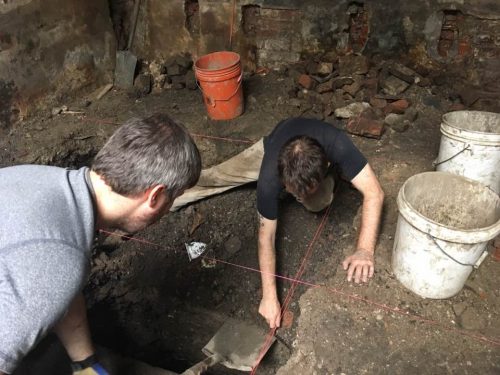 We elected to move forward with excavations by gridding off the accessible area and excavating some 1 x 1 m test units, in the hopes of revealing earlier deposits, including either antebellum pit features (like wells or privies) or intact Colonial era ground surfaces. The rear area of the building contained a series of antebellum construction fill deposits, which we eventually found to be concentrated around (and in) a brick shaft located in almost the center of the rear room.

This feature was built long before the present structures, and, once it was identified, it became the focus of our investigations. It measured just over a meter (or 3 feet) on a side. We hoped that this feature might have been filled during the era of F. Simon’s musical instrument repair shop at the address, as this would have been a potentially unique type of commercial deposit for nineteenth century New Orleans.

The soils inside the feature were mucky and inundated, making it impossible to screen in a conventional fashion. The only option for excavating in a timely fashion was to use a hose on site and water-screen the privy interior deposits. This is a messy process, especially after the natural water table was reached at about three feet below the existing grade. From this point, excavation required a constant alternation between bailing water and then rapidly excavating a black muck in which nothing could be seen until it was rinsed with clean water.

At around 6 feet below grade, the bottom courses of the brick walls were reached. This level was also marked by the presence of large ballast stones and pieces of wood, which had apparently been placed to cover over the top of an earlier unlined cess pit. This had been dug directly into the clay subsoil, and was offset slightly from the brick shaft continuing under its walls on one side. The fill in this cess pit was likely a primary nightsoil deposit, marked by the presence of countless seeds and small bone fragments. 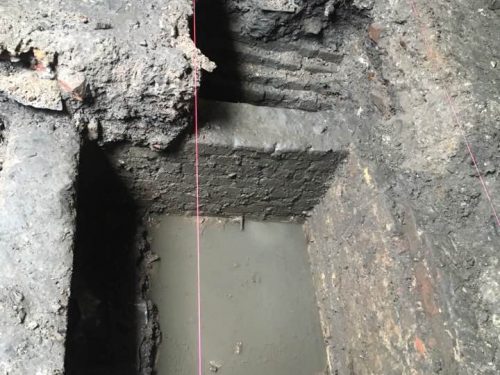 Most of the materials from the cess pit and the privy fill appeared to date from the period from 1810 to 1830, though some later (ca. 1850s) artifacts were concentrated in the upper portion of it. In addition, occasional much earlier (i.e. mid to late-eighteenth century) objects occurred sporadically throughout the fill. These items were probably displaced during the construction of later structures on the block and were redeposited into this fill.

Inundated soils like those found in the bottom of the privy create an anaerobic environment that preserves organic material far better than in typical midden or construction fill layers. It will take quite some time to sort through all of the material in the lab, but we hope to incorporate the data from this dig as a comparative sample for ongoing larger projects. Some of the artifacts recovered are illustrated in the following images here.