In April-May of 2017, archaeologists from UNO were invited by property owners to examine the property at modern 626 Bourbon Street in advance of planned renovations there. Almost the entirety of the footprint of the lot was occupied by a late-nineteenth century structure that had subsequently been altered in the twentieth century. The modern footprint incorporated the locations of a number of outbuildings in the rear of the property. During the antebellum, the property had been included in a larger lot extending towards St. Peter Street, including the modern 630-632 Bourbon addresses. It is shown in an 1855 watercolor plan and elevation by Tourné in the New Orleans Notarial Archives as being occupied by a small 2-bay frame structure, with a sign advertising it as the shop of F. Simon, a repairer of musical instruments.

The present lot does not clearly match eighteenth century land grants, but its developmental history goes back to the 1720s, with archaeological potential from this earlier era as well. Information about the history and chain of ownership of the lot can be found in the Collins C. Diboll Vieux Carré Digital Survey (http://www.hnoc.org/vcs/property_info.php?lot=18665).

The only portion of the property that was directly accessible to archaeological testing was in the interior of a rear addition. Initially, we hoped that we could sample the location of a probable privy shaft that was illustrated on late-nineteenth-century Sanborn insurance maps. However, after scaling the maps and comparing to the existing building footprint, it was found that the back wall of the main structure had shifted during twentieth century renovations, and anything left of this privy was likely located beneath a number of utilities and floor joists in the interior. 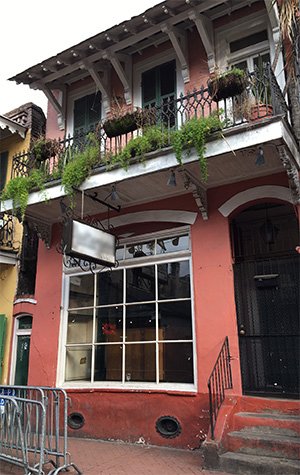